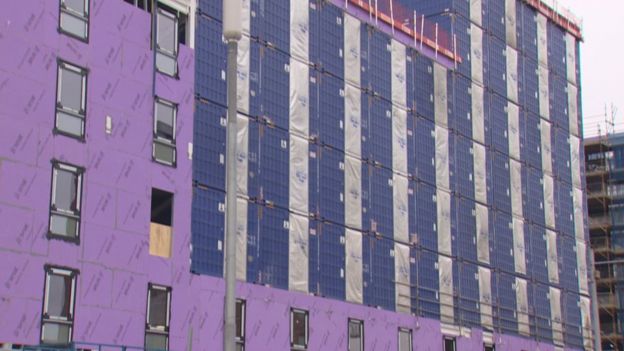 A new student housing block in Glasgow is using shipping containers stacked on top of each other in a method of construction described as similar to Lego. Not far from the River Clyde in the west end of Glasgow, an old industrial site, which has sat empty for years, is getting a new lease of life. Over the past two months 500 shipping containers arrived and the huge metal boxes were stacked on top of each other seven storeys high to provide accommodation for the city’s ever-growing student population. The big blue steel containers were made in a factory in China and they are fitted out to the “specification” required by the construction company. The boxes were transported by sea to the port of Southampton before making their journey by road to Glasgow.

Marc Carter, the managing director of True Student, which is responsible for the flats, says: “A very large 500-tonne mobile crane was used to load them on to the site much like you or I would have loaded Lego when we were small. “It is a little more technical than that but it is essentially a Lego system of construction and we can go up to 15 storeys tall.” The pace of the building project has been remarkable. In less than 10 weeks, the empty site has been transformed into housing for 500 students. And as part of the grand design, there will be a karaoke room, a cinema and a helter-skelter slide between floors. Mr Carter says: “The current student population are more discerning than we might have been at their age. So the build finish is a high specification.” The Lego block construction method brings advantages of speed and efficiency but the cost benefits can disappear if the builder tries to do anything too fancy with stacking arrangements.

So there have been concerns that the housing built by this method is uninspiring and uniform. According to Mr Carter, there has not been much opposition to the building method from locals, although some people may have been “perplexed” by it. He says: “They have seen a site that has suddenly become home to 500 blue shipping containers. It looks like a port. “Once it is finished they won’t recognise it as a shipping container system. It will be clad like any other modern building and will perform in the same way. “The method of construction becomes irrelevant once the construction is finished and it’s occupied.” Off-site building has come a long way since the 1940s when more than a million cheap and cheerful pre-fab homes were built to meet the post-war housing shortage.

Stephen Good, from the Construction Scotland Innovation Centre, says: “There are obviously connotations with the terminology of using the word ‘prefabs’ and the thought of living in converted shipping containers. “But these are completely different to prefabs of the past in terms of the way they are manufactured and the precision engineering.” One successful off-site construction already popular in Glasgow is the athletes’ village for the 2014 Commonwealth Games.

The homes the sports stars stayed in were built off-site and helped to transform a run-down area. Mr Good say’s “The market potential for them in a UK sense is absolutely huge.” He says off-site construction allows “multi-skilled technicians in lab coats” to assemble buildings as opposed to on-site tradesman battling against the vagaries of the weather. “The opportunity to assemble buildings in a factory environment allows you to control materials so the quality is not subject to the conditions we have to put up with on-site,” he says. Mr Carter agrees, saying: “One of the big advantages is speed. The development takes about 20% less time on site which obviously has a big effect on economics.