Modular units have potential as small-business incubators – The city of Sault Ste. Marie is looking at using refurbished shipping containers as small retail pop up shops for local businesses. To begin, the city have explored the idea by acquiring several units and placing them at various sites around the city which will be used by local enterprises as small retail shops. 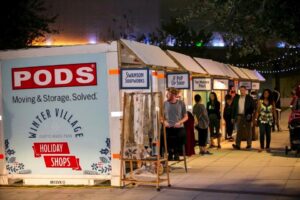 The city’s deputy CAO of community development and enterprise services, Tom Vair, said shipping containers are just one type of modular unit city staff is examining for the purpose.

With lots of suggested sites on the cards – including the waterfront, the boardwalk and the city’s famed Bondar pavilion, and downtown pedestrian plaza!

So what we envision is these modular units would be able to be moved and located in different areas of the city based on the need. Some of them are very basic and would be a mobile retail unit that the side could open up and serve patrons, others could include being outfitted with kitchen-type facilities. – Vair said during an Aug. 10 virtual meeting of council.

This practice has been adapted in other cities, some units are set up as small business incubators, allowing a fledgling entrepreneur to use space temporarily while they get their venture up and running.

Vair commented – We have seen in other communities programs that were launched that were almost an incubator, where they allowed an entrepreneur to try out retail or a service business in one of these modular units, and the idea being that if it was successful they would graduate and take up a storefront in the downtown.

More people are now becoming more aware of container cabins and their benefits in both housing and business ventures. We at container cabins have a full range to suit everyone’s needs of course. Our cabins serve a simplistic way of running any business at an affordable price – so why not start your adventure now!