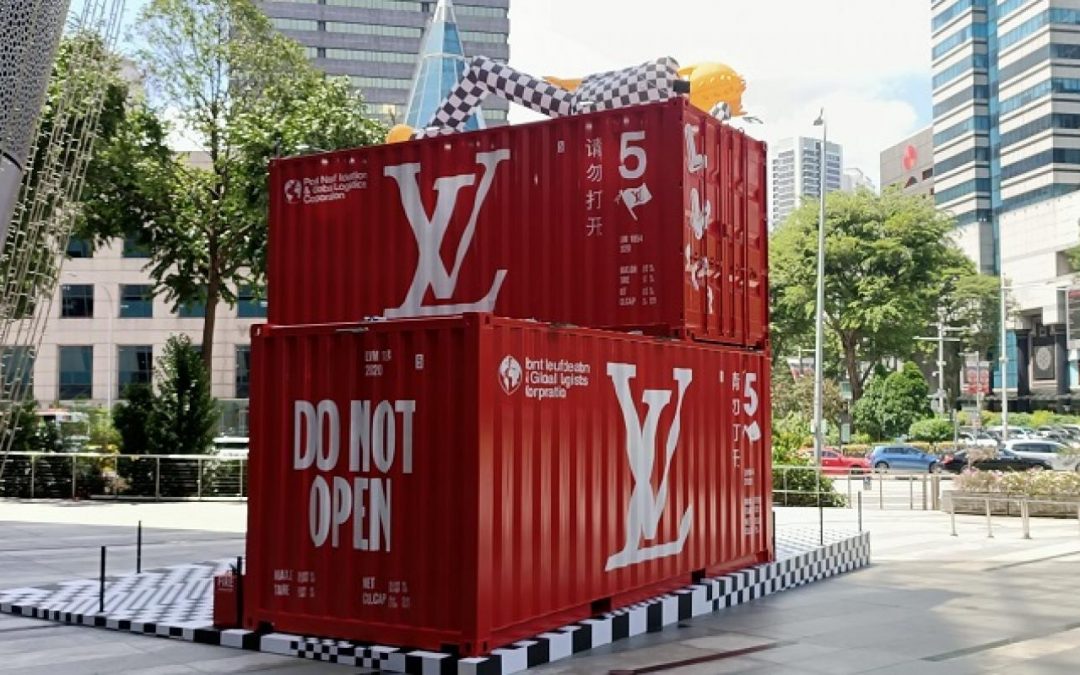 With the pandemic bringing most normal promotional activities to a standstill Louis Vuitton hit upon the idea of a roving exhibition of bright red LV branded containers to promote Men’s Spring Summer 2021 collection.

The distinctive containers, which are on “world tour” of sorts including Paris, Tokyo and Shanghai have made to Singapore and are now display outside the upscale Ion Orchard Mall in the heart of the Lion City’s shopping belt.

Decorated with quirky characters and labels such as “Do Not Open” the containers are proving to be hit with selfie takers and Instagram posters, unusual for something as utilitarian as a shipping container.

On a panel together at the global maritime environmental congress (gmec) as part of SMM Digital, there were few areas of common ground between NGO and shipping panellists.

Insufficient target
“Already the measures in place to meet the 2030 goal are not enough,” said Sönke Diesener, Transport Policy Officer, Nature and Biodiversity Conservation Union (NABU). “There is already a lack of ambition if you look at these measures which will not bring a move as fast as possible to a peak in emissions from shipping. You already have a set of regulatory measures that will not meet your own goals.”

Adding to shipping’s failure in the NGOs’ views was their belief that the IMO goals themselves fell short of setting targets in-line with the United Nations Framework Convention on Climate Change (UNFCCC) Paris Agreement.

“To say that the targets are insufficient is very subjective,” said Bud Darr, Executive Vice President, Policy & Government Affairs, MSC Group. “If the targets were insufficient then I think governments should have said that at the time at IMO. I will point out that we’re working under an initial strategy with initial levels of ambition that is in the pipeline to be reviewed. They are insufficient, they can be changed.”

Lars Robert Pedersen, Deputy Secretary General, Bimco, took a very different view of the IMO regulation: “The IMO strategy is quite a visionary thing that has been established on a global scale for our industry. When you really read the initial strategy and its vision and mission and all the targets in there, I don’t think we can point to any other industry in the world which has defined X tonnes of CO2 as the maximum allowed emissions by 2050. This is quite something, and the essence of having such a clear goal is that it is so easy to understand for everyone that is going to do something to meet this goal.”

Availability of technical solutions
Where there was agreement on the panel was that shipping needs to completely decarbonise, and that the technology to enable this does exist, but there is work to be done to bring them to market. In the meantime, there are prudent choices that can be made now to reduce the cost of decarbonising down the road.

“You can’t buy it today, but this is just a market issue and a political regulation issue. Technical solutions in theory and in principle are developed. That doesn’t mean that we have all of the bits and pieces yet, there is of course a lot of research and development necessary to be able to have the technical solutions we may use in 2050.

The availability of technical solutions in need of development was central to the need for better, more ambitious regulation, according to Diesener.

Fuels availability
A counterpoint to the availability of technology is the availability of the necessary fuels, said Darr. He expected engine manufacturers to have solutions ready in time for using methanol as a drop-in fuel or using ammonia in dual fuel LNG engines, “what’s missing is the developments on the fuel side from energy producers at scale,” he said.

After agreeing with the need to attack the fuel availability issue, Arnaud Boehmann, Spokesperson, Fridays for Future Germany, laid out where he sees shipping industry and environmental NGOs differ most: urgency.

“We do genuinely appreciate that people are now today doing something they did not do 10 years ago, which is say ‘Yes we know that we need to decarbonise, we want to do it and we will do it.’ However, we do not share the same sense of urgency,” said Boehmann.

“Take as an example Covid and the vaccine issue. When Covid hit and we saw that the pandemic crisis was not going to go away without a solution in hand, there was a global effort and a sense of urgency that this was an immediate crisis that we needed to solve by doing what needs to be done. This feeling is not one I’ve seen to date in the shipping industry [on decarbonising].”

That need for ambition and urgency sat in tension with the need for profitable shipping, something the NGOs said was not their concern. “It is our job, and we are very well suited to it, to be a pain in the ass. Whether that’s the shipping industry’s ass or someone else’s,” said Boehmann.

“Actually, this whole issue about profitability is one of the key issues to get a grip on. How can we have ships of fundamentally different carbon footprints trading side by side during the course of the transition? How can they compete in the same market when they cost different amounts to operate? Until we solve that we will see only piecemeal solutions.”

Balancing the need to be profitable, Darr believes the issue of cutting emissions is existential, predicting that with mounting pressure to go green, there will come a convergence sometime in the future where it is not economically feasible to operate without a focus on carbon.

“I think decarbonising is going to be an essential part of a social license to operate. I think that commitments towards this sort of decarbonising necessity is fundamental,” said Darr.